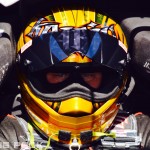 At 40 years old, Kris Krabill, is one of the fiercest and youngest drivers on the Nostalgia Funny Car Circuit. As a second generation racer, Kris was raised with a competitive edge and agility to win races.

At an early age of 16, Kris joined the list of young racers in a series of bracket racing events. During 1992-1994, Torco Racing Oils signed on as a primary sponsor for Kris’s Super Comp dragster. Kris won close to 30 races and finished in the top ten each year. At the end of the 1994 season, Kris met Gary Turner during a race in Woodburn, Oregon and worked as a full-time crew member on Turner’s Top Alcohol Dragster until the 1997 season.

In 2006, Kris debuted in his Nitro Nostalgia Funny Car rookie season. Kris secured the 2006 Goodguys Nostalgia Funny Car Championship and became the 3rd member of the honorable ‘Auto Meter 5 Second Club.’ In the 2006 season, Kris also went undefeated and had his name become forever etched in the history books as being the first Funny Car winner at the famed California Hot Rod Reunion. Since the 2006 racing season, Kris has competed all over the country and has won many of the largest races in the class.

It is perseverance and hard work that has led Kris Krabill to be a champion. With many goals to achieve and so little time to achieve them, look for Kris to be hard charging throughout his path to the top. Through many years of experiences on and off the track, Kris has established himself as one of the most diverse and marketable drivers on the circuit today.